I will be the President for all Americans, we will double our growth: Donald Trump 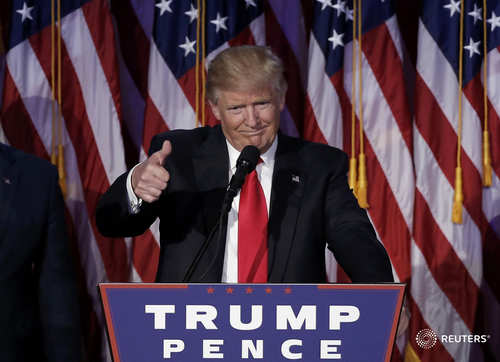 The camp broke into celebration after he won the crucial Presidential elections and became the 45th President of the United States.

Advertisement
&ldquo;Just received a call from Hillary Clinton. She congratulated us - it's about us and I congratulated her & her family. Hillary has worked and we owe her a major debt for her service to this country,&rdquo; said Trump.

The newly-elected President termed his presidential campaign as an incredible movement.

&ldquo;Ours was not a campaign but rather an incredible and great movement made up of millions of hardworking men & women,&rdquo; he said.

Advertisement
&ldquo;The forgotten men and women of his country will be forgotten no longer. I will be Presidents for all the Americans,&rdquo; said Trump.

The billionaire President-elect assured growth also. &ldquo;We will double our growth and have the strongest economy in the world. We will seek common ground, not hostility. We will build partnership, not conflict,&rdquo; said Trump.

&ldquo;America will no longer settle for anything less than the best. We must reclaim our country's destiny. Every single American will have the opportunity to realize his or her fullest potential,&rdquo; said Trump.

Advertisement
Meanwhile, Trump said he will be friendly with those nations who are with the US. &quot;Will deal fairly with all other nations,&quot; said Trump.
NewsletterSIMPLY PUT - where we join the dots to inform and inspire you. Sign up for a weekly brief collating many news items into one untangled thought delivered straight to your mailbox.
CAPTCHA: