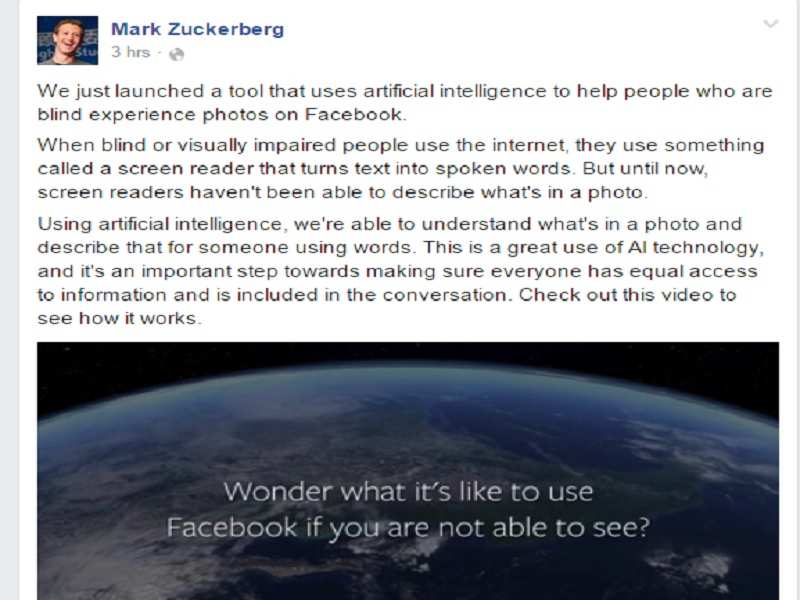 ’s can now automatically read out descriptions of photos and videos on their Newsfeed, which means they will be able to visualize what’s in the photo or video on their wall.
TOP VIDEOS FOR YOU

This because the social network is now able to "understand" images such as food, people and trees, and will now be able to describe them to visually-impaired smartphone owners using what’s called a screen reader technology. This will tells users what is on the screen with a computer-generated voice.

Advertisement
How is it different from the past? Well previously, Facebook simply described a blind user's News Feed by saying the name of somebody posting the image, and then saying "photo". But from now on it will be able to describe what is in the image by detecting things in it. So it would say "image may contain: two people, smiling, sunglasses, sky, outdoor, water" for a photo of a couple on holiday by the sea beach.
The company expects this technology will do wonders in increasing the user friendliness of the website for blind people because it claims there are 2 billion photos which are shared every day across Facebook, and WhatsApp, and that it has 39 million blind users and 246 million who are severely visually impaired.

Recent studies have shown that blind people often feel excluded from conversations on social media centered around photos and videos.
While the company, using image recognition technology, was able to make facebook understand the photos (such as when it suggests you what friends should be tagged in photos), it has been ramping up investment in machine learning to solve the difficult task of getting computers to better recognise objects in photos now.

Advertisement
The work on automatic photo-reading for visually impaired people has been on for close to10 months now. But for a technology of this strength, it seems success has come far too quick than was expected. No doubt it is still in its nascent stages, but can recognise around 100 concepts including babies, beards, mountains, smiling and selfies with a precision of at least 80 per cent. There’ll be more as the technology becomes smarter.

Notably, Twitter also recently introduced a new feature to help blind people understand photos on its network - but Facebook's is far more advanced. While Facebook uses AI to automatically detect what's in a photo, Twitter requires users to manually add a description, which it can then narrate.

As of now, the Facebook feature is being introduced only in English on devices in the US, UK, Canada, Australia and New Zealand and the company plans to expand it in the future.
NewsletterSIMPLY PUT - where we join the dots to inform and inspire you. Sign up for a weekly brief collating many news items into one untangled thought delivered straight to your mailbox.
CAPTCHA:

Next StoryWith Google, now search your health woos away
Advertisement
Popular on BI
1
Victoria's Secret abandons its scantily dressed Angels, saying they're no longer 'culturally relevant.' Activists and entrepreneurs will be the new faces of the brand, it says.
2
Whether it's half a million or three million — 'low skilled' IT jobs in India are definitely at risk
3
Rapper Raftaar is the first Indian artiste to accept cryptocurrency as performance fees
Latest Stories
Trending News
Buying Guides
Advertisement
Advertisement
With Google, now search your health woos away
This factory is the key to Tesla's future
These apps just got upgraded with new features and the experience is great
Popular Categories
Trending Right Now