Advertisement
SCMP
Nov 20, 2019, 16:36 IST
With New Delhi engulfed in toxic smog, a new establishment offering people a breath of fresh air is proving popular in the Indian capital.Over the past fortnight, the city has seen a public health crisis, with authorities twice declaring a pollution emergency and shutting schools while advising the elderly and infants to stay indoors.
Advertisement
Concentrations of the most harmful airborne pollutants in the a city of 25 million are regularly about 20 times the World Health Organisation
safe limit as industrial pollution and vehicle exhaust fumes – combined with smoke from crop stubble burning – cast a toxic pall over the metropolis.

But at Oxy Pure customers can inhale 80-90 per cent pure oxygen infused with essential oils such as peppermint, cinnamon, lavender and lemongrass for 299 rupees (US$4.17) per 15-minute session. 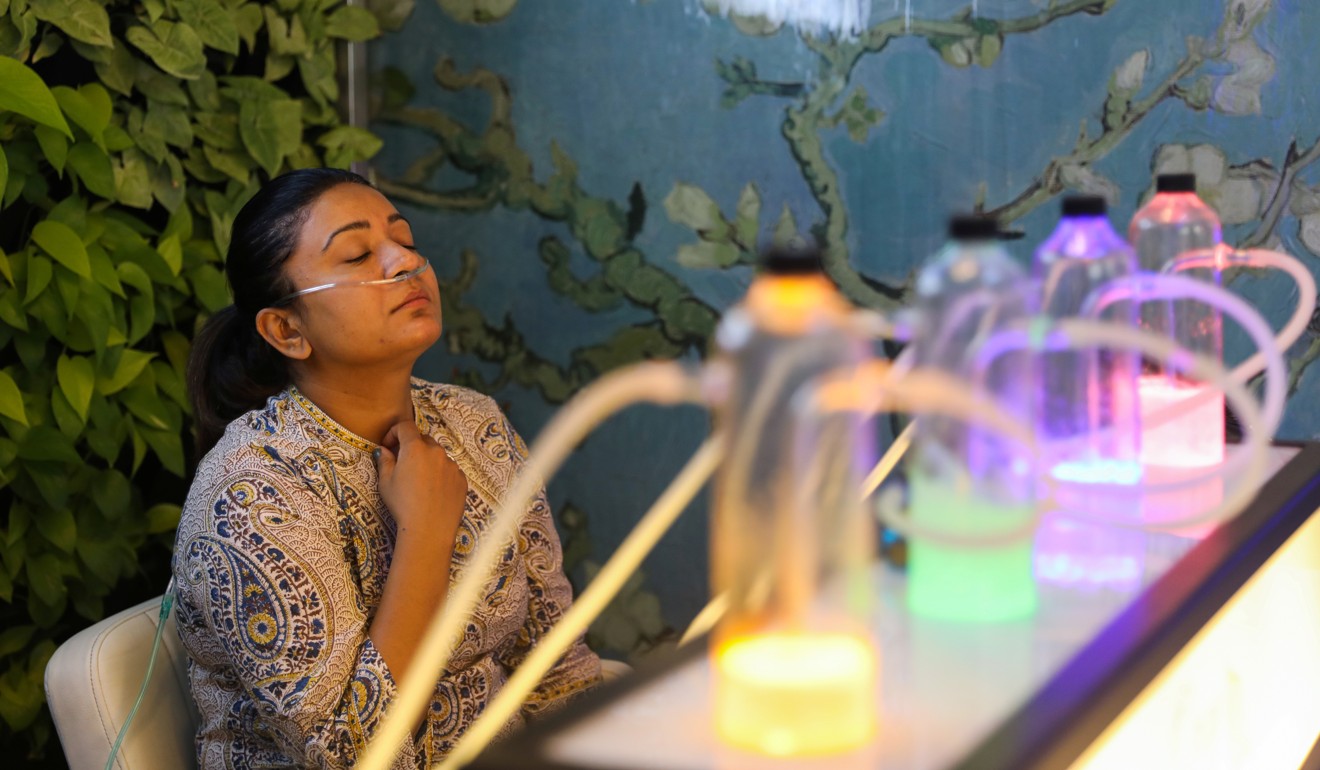 Nishika Waghela, 33, breathes in oxygen mixed with different scents at Oxy Pure. Photo: Reuters
Advertisement
The was launched in May by Aryavir Kumar and Margarita Kuritsyana, and supplies its scented air through lightweight tubes placed under the customers’ nostrils.

Kumar said he gets between 30 and 40 customers per day, as well as providing “portable cans” of air that they can carry around with them.

Some of those who have tried it after suffering the ill effects of pollution – itchy eyes, runny noses and throat infections – say they were unsure if the therapy had a psychological effect, but it did make them feel refreshed. A motorcyclist passes a worker sweeping a road shrouded in in New Delhi. Photo: Bloomberg

Others were less sure, however, with several taking to social media to criticise the very concept behind the bar and one declaring that Delhi “has officially gone mad”.
Advertisement
Doctors say taking oxygen for a short while, even in high concentrations, has no benefit, and breathing extremely high levels can actually be harmful, including causing lung damage.

Several Delhi residents, like Kapil Gulliya, who works with a financial services firm, described the oxygen bar as a gimmick, misusing the alarm over pollution for commercial purposes. “What use is 15 minutes of oxygen when pollution is many times the safe limits here, equal to smoking 30 cigarettes a day?”


Last week, India’s Supreme Court criticised the government for making “little constructive efforts” to curb pollution. The court has ordered a new clampdown on stubble burning on farms surrounding the capital.Bonny Irengbam, a senior sales assistant at Oxy Pure, told The Indian Express newspaper that “some people, who try it for the first time, will feel relaxed and fresh. But only people who undergo the sessions regularly will get real benefits of the aroma.”

Irengbam said he does not encourage back-to-back sessions and advises his customers to stick with one 15-minute session per day.
Advertisement
“I was passing by and saw that they were offering pure oxygen. I thought I’ll give it a try and went for the lemongrass flavour. It was refreshing,” Manjul Mehta, an Oxy Pure customer, told the daily.

Oxy Pure is located in an upscale mall in the south of Delhi, with a second outlet expected to be launched by next month at Delhi’s main airport, according to Irengbam.
{{}}
NewsletterSIMPLY PUT - where we join the dots to inform and inspire you. Sign up for a weekly brief collating many news items into one untangled thought delivered straight to your mailbox.
CAPTCHA: