Hurricane Delta grew from a tropical storm to a Category 4 hurricane in 1 day. Here's how cyclones are now intensifying so quickly.

In the span of a single day, Hurricane Delta swelled from a tropical storm to a major hurricane. It's churning toward Mexico's Yucatan Peninsula, where it's expected to make landfall late Tuesday or early Wednesday. Then forecasts suggest it could move back over water and make a second landfall in Louisiana later this week.

By Tuesday morning, Delta had whipped itself into a 130-mph frenzy, making it an "extremely dangerous" Category 4 hurricane, according to the National Hurricane Center. But 24 hours prior, its winds were just 45 mph.

That swift change is called rapid intensification — the term refers to a process in which a tropical cyclone's maximum sustained winds increase by 35 mph in just 24 hours. Hurricane Laura did the same thing in August, when it jumped from a Category 1 to a Category 4 in one day.

Delta has not stopped intensifying since it emerged. As of Tuesday evening, the storm's winds were wailing at 145 mph.

"No other Atlantic hurricane has ever strengthened this much this quickly immediately after it formed," meteorologist Eric Holthaus said on Twitter. "We are in a climate emergency."

makes more frequent and devastating, on average, than they would otherwise be.

"Our confidence continues to grow that storms have become stronger, and it is linked to climate change, and they will continue to get stronger as the world continues to warm," James Kossin, an atmospheric scientist at the National Oceanic and Atmospheric Administration, told the Washington Post in August.

How a hurricane forms

Hurricanes are vast, low-pressure tropical cyclones with wind speeds over 74 mph. They form over warm water near the equator, when sea surface temperature is at least 80 degrees, according to the NHC.

That's because when warm moisture rises from the ocean, it releases energy and forms thunderstorms. As more thunderstorms appear, the winds spiral upward and outward, creating a vortex. Clouds then form in the upper atmosphere as the warm air condenses, and an area of low pressure forms over the ocean's surface. Then hurricanes just need low wind shear — a lack of prevailing wind — to form their cyclonic shape.

Cyclones start out as tropical depressions, with sustained wind speeds below 39 mph. Once winds pass that threshold, the cyclone becomes a tropical storm. Then above 74 mph, the storm is considered a Category 1 hurricane on the Saffir-Simpson scale.

The Atlantic hurricane season generally runs from June through November, with storm activity peaking around September 10. On average, the Atlantic sees six hurricanes during a season, with three of them developing into major hurricanes (Category 3 or above).

In total, the Atlantic Ocean has produced 25 named storms in just six months. That's just three fewer than in 2005, which had the greatest number of named storms in history. But 2020 is ahead of the 2005 season by more than a month, so is likely to break the record.

Hurricanes are getting stronger

That also enables storms to intensify and develop into powerful hurricanes in less time.

In a recent study, Kossin's team found that each new decade over the last 40 years has brought an 8% increase in the chance that a storm turns into a major hurricane.

"Almost all of the damage and mortality caused by hurricanes is done by major hurricanes," Kossin told CNN. "Increasing the likelihood of having a major hurricane will certainly increase this risk."

Generally, a strong storm also brings a storm surge: an abnormal rise of water above the predicted tide level. If a storm's winds are blowing toward the shore and the tide is high, storm surges can cause water levels to rise as rapidly as a few feet per minute along a coast. Higher sea levels lead to more destructive storm surges.

Even if we were to cut emissions dramatically starting today, some sea-level rise is already inevitable, since the planet's oceans absorb 93% of the extra heat that greenhouse gases trap, and water (like most things) expands when heated.

Over the past 70 years or so, the speed at which hurricanes and tropical storms travel has dropped about 10%, according to a 2018 study. Over land in the North Atlantic and Western North Pacific specifically, storms are moving 20% to 30% more slowly.

That gives a storm more time to pummel an area with powerful winds and rain. 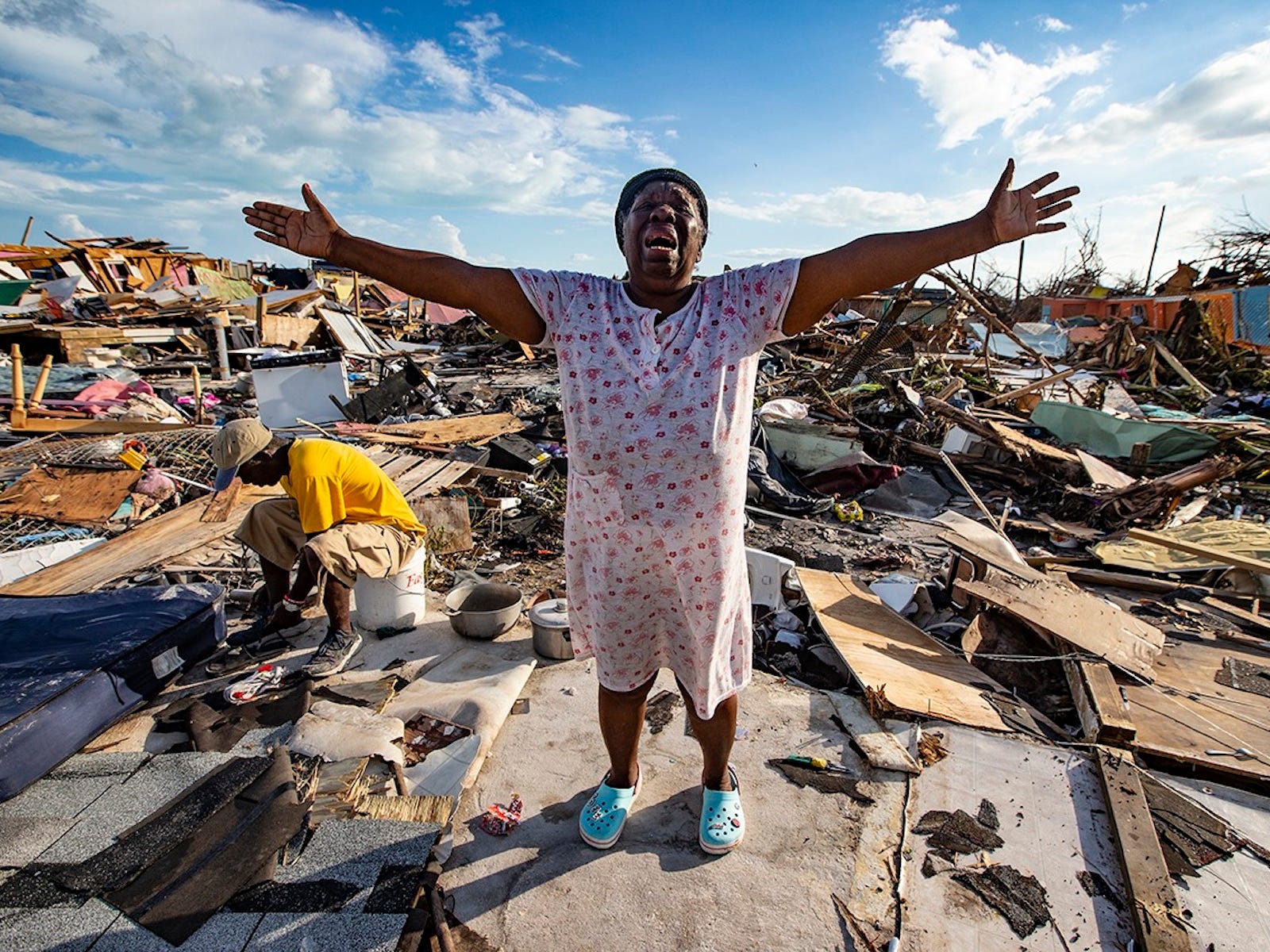 To make matters worse, a warmer atmosphere can hold more moisture, so a 10% slowdown in a storm's pace could double the amount of rainfall and flooding that an area experiences. The peak rain rates of storms have increased by 30% over the past 60 years.

Hurricane Harvey in 2017 was a prime example of this: After it made landfall, Harvey weakened to a tropical storm, then stalled for days over Houston, dumping unprecedented amounts of rain. The storm flooded much of the city, killed more than 100 people, and caused $125 billion in damages.

Climate scientist Michael Mann wrote on Facebook that Hurricane Harvey "was almost certainly more intense than it would have been in the absence of human-caused warming."

Hurricane Dorian did something similar last year when it hung over the Bahamas, pummeling the islands with 185-mph winds and up to 30 inches of rain. Although the country's government only counted 74 dead, a NOAA report estimated that more than 200 people died in the storm.