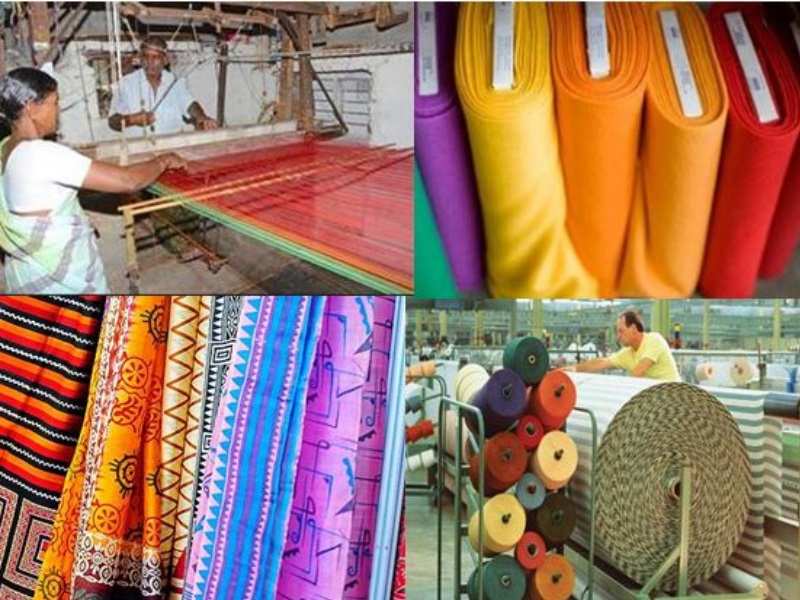 World’s second largest producer of cotton and silk is also the second largest textile manufacturer. India, the story that is waiting to be told on the world forum will soon turn into the biggest success India has even seen after IT, provided the ‘’ campaign gives it the much needed fillip.

TOP VIDEOS FOR YOU
In fact, textile is what connects the modern society to anthropology. Archeologists have found evidences to support the fact that weaving existed during the time of Harappan civilisation. Humankind back then, was adept with weaving, and spinning. Supportive literature has been found in Vedic manuscripts as well.

Textile was something ancient India always engaged in, with other countries such as Egypt. The tombs of dead possessed block printed cotton with resist-dyed fabrics that were traced back to Gujarat! At this juncture, two civilisations had engaged in trade with each other since time immemorial.
Advertisement

After the British colonialised India and took over the reins of administration from smaller princely states, the cry for freedom started resonating from all corners of the country. Quit India movement started, which was a crucial step towards ensuring freedom for the country. Gandhiji’s ‘Swadeshi’ movement had a very significant role etched out for textile.

From being a mere fabric, turned into the symbol of freedom through this period. Gandhi took the humble charkha and made it a symbol of resistance to British rule in India.

Cut to modern times and consider these facts. This industry is truly an equal opportunity employer. Traditionally, after agriculture, this is the only other sector that has generated huge employment opportunities for people irrespective of the literacy levels since it uses both skilled and unskilled human resources. Over 35 million people are employed in this sector either directly or otherwise.
Advertisement

Textile industry, which thrives on both handloom sector and powerlooms, has been riding way too many horses and has tasted success with each off shoot of its own industry. Whether it is woolen looms, jute or silk, has home grown experts who have provided the much needed orientation with excellent support system.

In the recent times, the availability of raw material at reasonable costs and availability of labour, along with giant strides in technology involving the progress of textile industry, it has turned into a sector that holds lots of promises.

Major textile companies in the recent times, posted a good growth with increase in net profit and a significant drop in net loss, signaling good times ahead for the sector.
Advertisement

What has helped the textile industry, however, is the fact that neighbouring countries like China and Bangladesh who are significant players in the same sector facing structural challenges to the extent that it has affected their export capabilities.

India’s increasing efficiency in the sector along with 100% FDI allowed in the industry, is helping Indian textile firms consolidate their export positions. With US economy being slightly on the revival mode and India’s aggressive campaigning with Prime Minister Modi’s ‘Make In India’ tagline, textile sector is out to see much better days ahead than in the recent past.

A free trade agreement with Eurpoean Union can seriously turn things around for India that is looking at enhancing its textile potential within and outside the country.
Advertisement

India being the third largest exporter is looking at all possible ways of taking over the space left vacant by China. Tapping new markets, while working in its own space to meet the challenges seem to be the two roads ahead of Indian textile sector which is awaiting government’s booster dose to get its yarns into the looms.

Mega textile shows have been held in new markets such as Japan, Middle East and more are planned to enter spaces in Latin America and Eastern European Countries which are among large economies that can strengthen India’s ‘Make In India’ campaign.

The concept of smart cities that can house multiple expertise, along with organising of skilled and unskilled labour, fair practices and a consolidated legal framework to protect the interest of both workers and employers can surely place textile industry on a growth trajectory like never seen before.
Advertisement

India can then make it for both the world, and for self.

Next StoryEssential Skills Of Project Managers In 2015
Advertisement
Popular on BI
1
'Big Short' investor Michael Burry is back on Twitter - and warning of the biggest market bubble in history
2
Every country wants a piece of cryptocurrency, but how is it benefiting them?
3
KIMS IPO – most analysts are bullish on the hospital chain’s prospects
Latest Stories
Trending News
Buying Guides
Advertisement
Advertisement
Essential Skills Of Project Managers In 2015
Here's Why Vladimir Putin Is The World's Most Powerful Person, No Matter What America Does
Tony Robbins Explains How He Helped Andre Agassi Get Out Of A Slump In 1993
Popular Categories
Trending Right Now