Advertisement
SCMP
Sep 19, 2019, 10:58 IST
whooped for joy. After a gruelling climb over 52 days, several near brushes with death, and as severe a test of her will as she had ever faced, she was on top of the world. She had conquered Everest – the first woman amputee to accomplish this feat.

Since that day in May 2013, Sinha has scaled the highest peaks on five other continents and is just one summit away – McKinley in North America – from completing the Seven Summits Challenge to reach the highest point on each of the seven continents.

A former national level volleyball player in India, Sinha was travelling from Lucknow to New Delhi in 2011 by train when robbers tried to snatch her gold necklace. “I resisted and so they pushed me out of the train,” says Sinha, who watched in horror as another train sped towards her and ran over her left leg. “I lay by the train tracks bleeding and screaming in pain the entire night, fighting off rats.”

Advertisement
Villagers found her in the morning and carried her to the local hospital, which lacked basic facilities. Doctors amputated her left leg below the knee and inserted a rod in her right leg to support it – without anaesthetic. 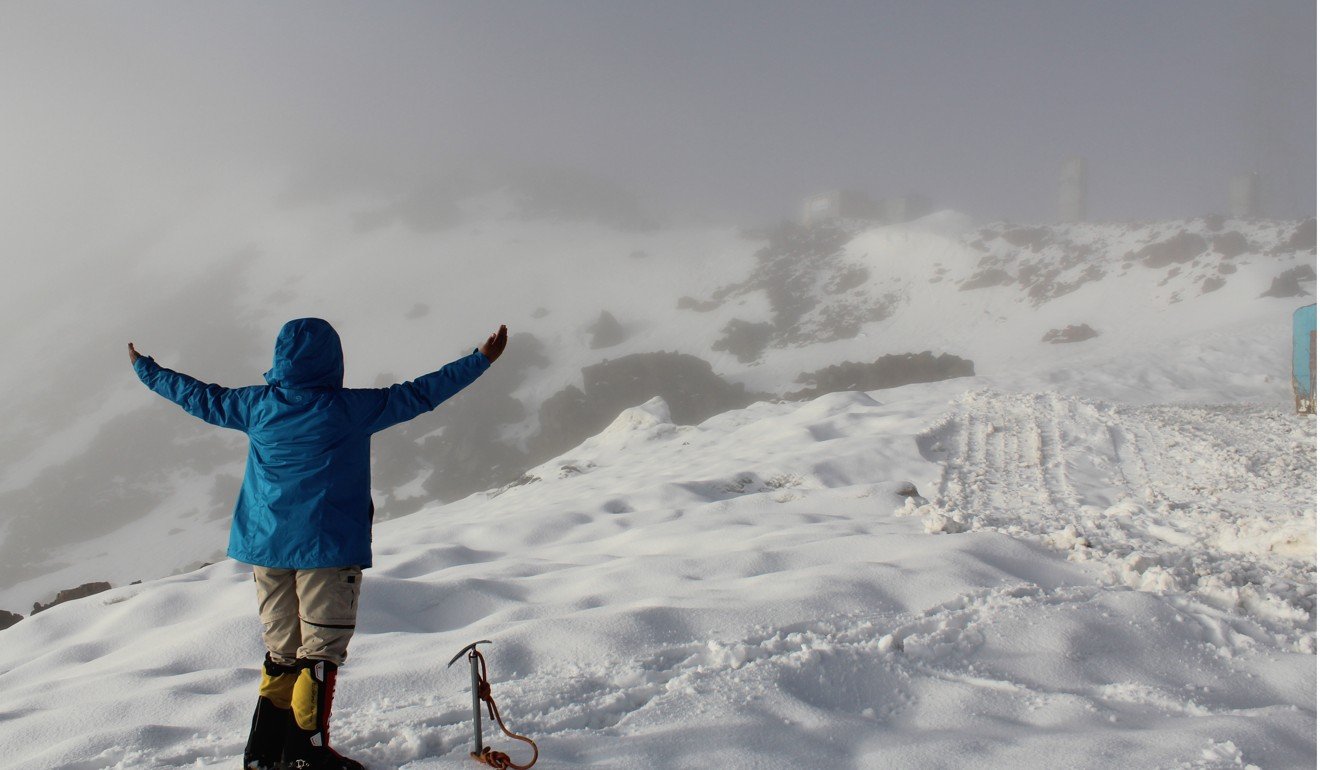 Sinha was moved to a New Delhi hospital where she was fitted with a prosthetic leg and spent four months recovering. Those were her “darkest hours,” when she came to hate the look of pity in people’s eyes. She took inspiration from Yuvraj Singh, an Indian cricketer who had successfully battled lung cancer and was forging his return to the elite levels of the sport.
Advertisement

After leaving hospital, she contacted Bachendri Pal, who in 1984 had become the first Indian woman to summit Everest. Pal heads the Tata Steel Adventure Foundation, funded by India’s leading steelmaking company. Moved by Sinha’s story, Pal took her under her wing.

“When I met Arunima, I told her, ‘In your heart you have already climbed Everest. Now you merely need to prove it to the world’,” says 65-year-old Pal. “In the early stages, she could barely walk. Her legs would bleed and swell up making every step excruciating. But she persisted.”

Sinha spent two years under Pal’s guidance, building both her physical and mental toughness. She enrolled in the Nehru Institute of Mountaineering, Uttarkashi, training in the mountains of Uttarkhand, Ladakh and Nepal.
Advertisement 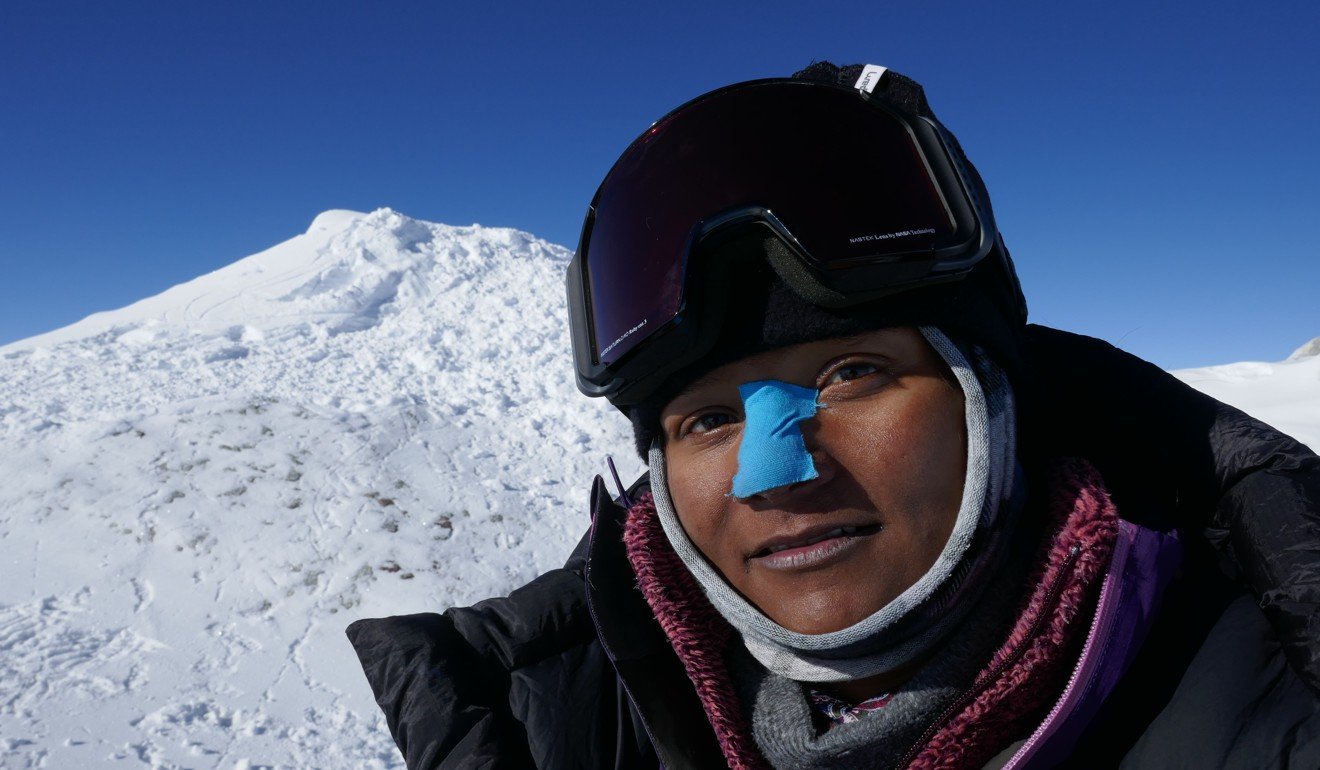 “I felt demotivated when I couldn’t keep up with the other climbers, but I was determined to outpace them,” says Sinha. After eight months her legs grew accustomed to climbing. She ascended progressively higher mountains, moving to Island Peak or Imja Tse (6,189 metres) in the eastern Nepalese Himalayas and Mount Chamser Kangri (6,622m) in Ladakh, India. She learned to use ropes to climb, carrying 20kg of supplies and walking with crampons for traction on ice.

Advertisement
Tata Steel helped her cross the final hurdle, providing sponsorship to cover costs that can range from US$40,000 to US$90,000. On April 1, 2013, Sinha began her quest as a part of the company’s Eco Expedition Everest Group.

Climbers tackle hazards that include freezing temperatures, altitude sickness, avalanches and blizzards. After reaching Camp 2 at 6,400m, the second of four stops en route to the 8,858m summit, Sinha ran into serious and unique difficulties.


I resolved that I would not let the fear of death hold me back … I knew that if I turned back then, I would never forgive myself. It was now or neverSinha on risking her life to continue through Everest’s death zone


“Banging my feet against the snow to get a grip on the ice, I damaged my artificial leg stump. On several occasions my artificial leg turned 180 degrees and I had to put it back to its normal position which slowed me down,” she says. “I had to crawl along the slope to move forward, annoying the climbers behind me.”

Advertisement
At Camp 4 at 8,000m – the infamous ‘death zone’ where the ambient oxygen level is so low that the body’s cells slowly begin to die – Sinha witnessed dead bodies, and even saw a climber who had run out of oxygen take his last few breaths. “I resolved that I would not let the fear of death hold me back,” she says.

On May 21, after hours of strenuous climbing, Sinha’s group had reached the Hillary Step, just 100m from the summit. Stretched in front of them was a human traffic jam along a dangerously narrow route
in which only one person could pass at a time. It took two hours for the jam to clear, by which time Sinha was running low on oxygen. 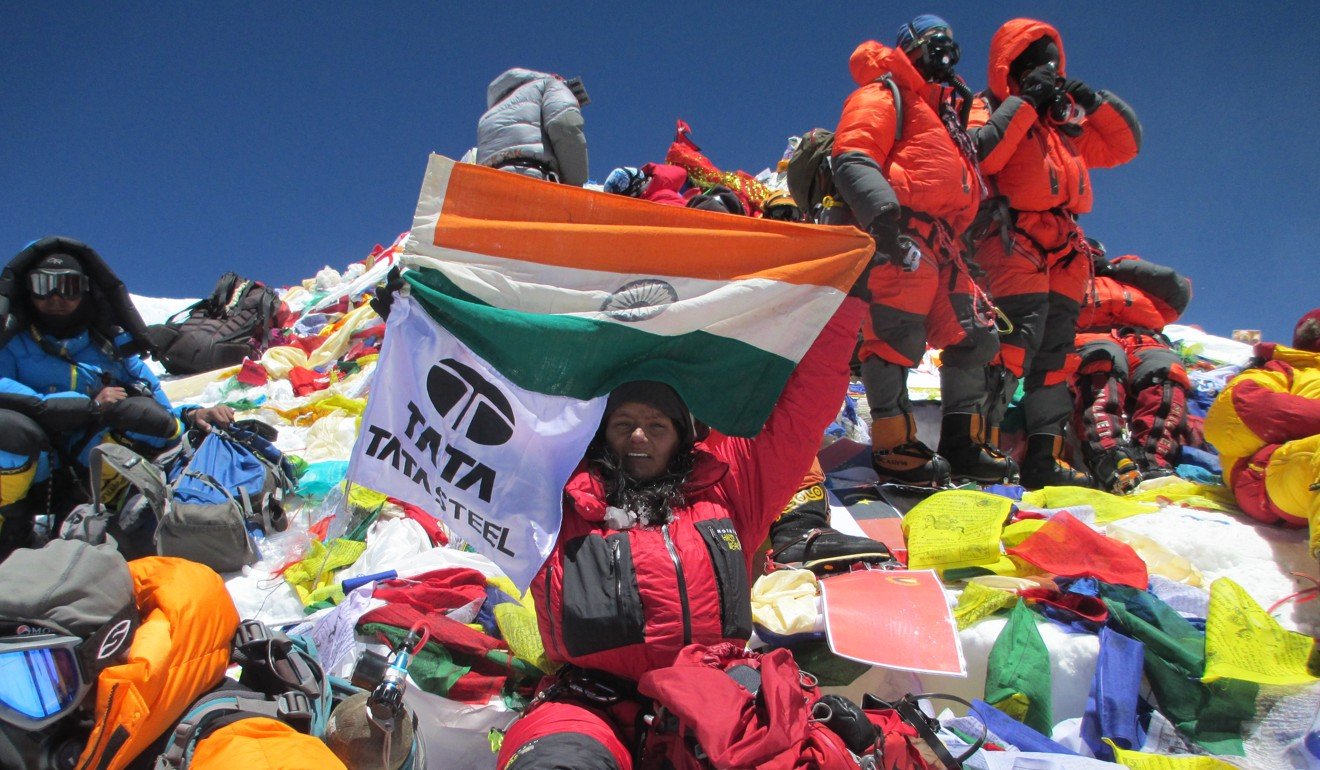 Advertisement
Her sherpa, Neema Kancha, warned that if she continued up, she might not survive the climb down. “I knew that if I turned back then, I would never forgive myself. It was now or never,” says Sinha, who pushed on. Two hours later, she stood on top of the world.

“I felt like dancing, crying and laughing, all at the same time. I wanted to tell the world: here I am!”

Unfurling the Indian flag, she recorded a one-minute video, asking Kancha to send it home if she didn’t survive.

Advertisement
The climb down Everest is far more deadly than the ascent. Thirty steps into her descent, Sinha’s oxygen ran out. Luckily, a climber had turned back before reaching the summit and left behind an extra oxygen cylinder which Sinha put to lifesaving use.

I would not have climbed Everest had I not met with the accident in 2011. Though I lost my leg, it made me a stronger person


When Sinha’s artificial leg came loose, she could not risk removing her gloves to secure it in the biting cold (-30 to -40 degrees Celsius) as she could have lost her hand to . Instead, she held the support rope with one hand, and her prosthetic with the other, dragging herself down to the first stop. It usually takes 17 hours from Camp 4 to the summit and back. It took her 28 hours.

Her determination was well rewarded.
Advertisement 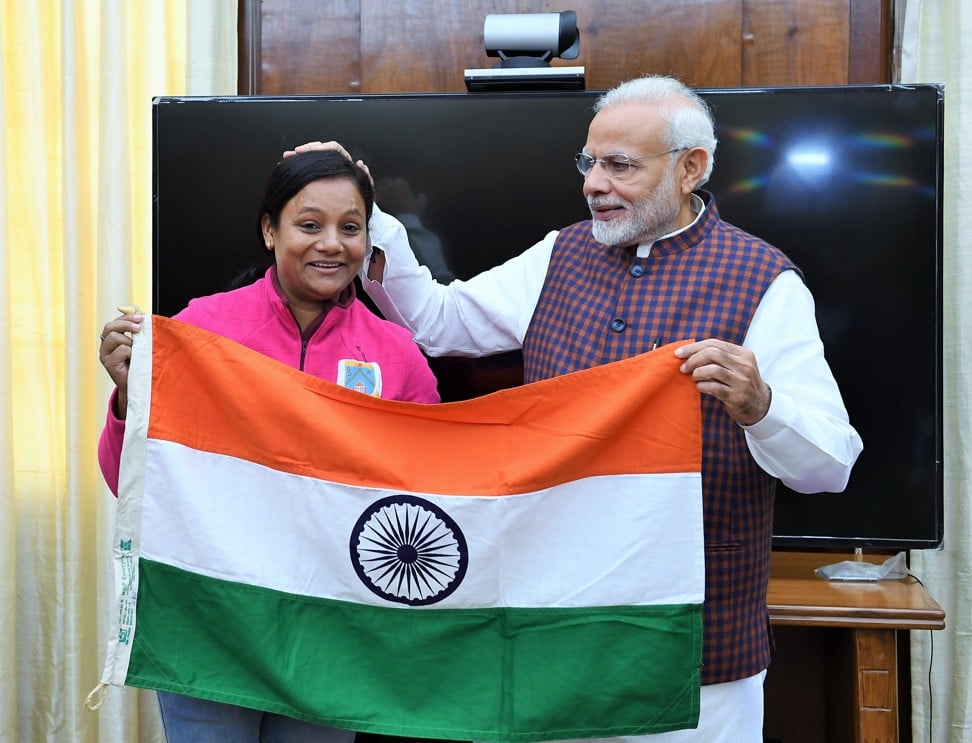 “At 23 years of age I lost my leg, but at 25 years of age I realised my dream,” she says. Indian Prime Minister Narendra Modi launched her memoir, Born Again On The Mountain, in December 2014. In 2015, Sinha was awarded India’s fourth highest civilian award, the Padma Shri, and the Tenzing Norgay National Adventure Award.
Advertisement

Sinha has established an eponymous foundation to empower women and disabled children, and plans to set up a sports academy for underprivileged and physically challenged children in India’s Uttar Pradesh state.

“I would not have climbed Everest had I not met with the accident in 2011. Though I lost my leg, it made me a stronger person,” she says, adding she wants to give opportunities for growth to others. 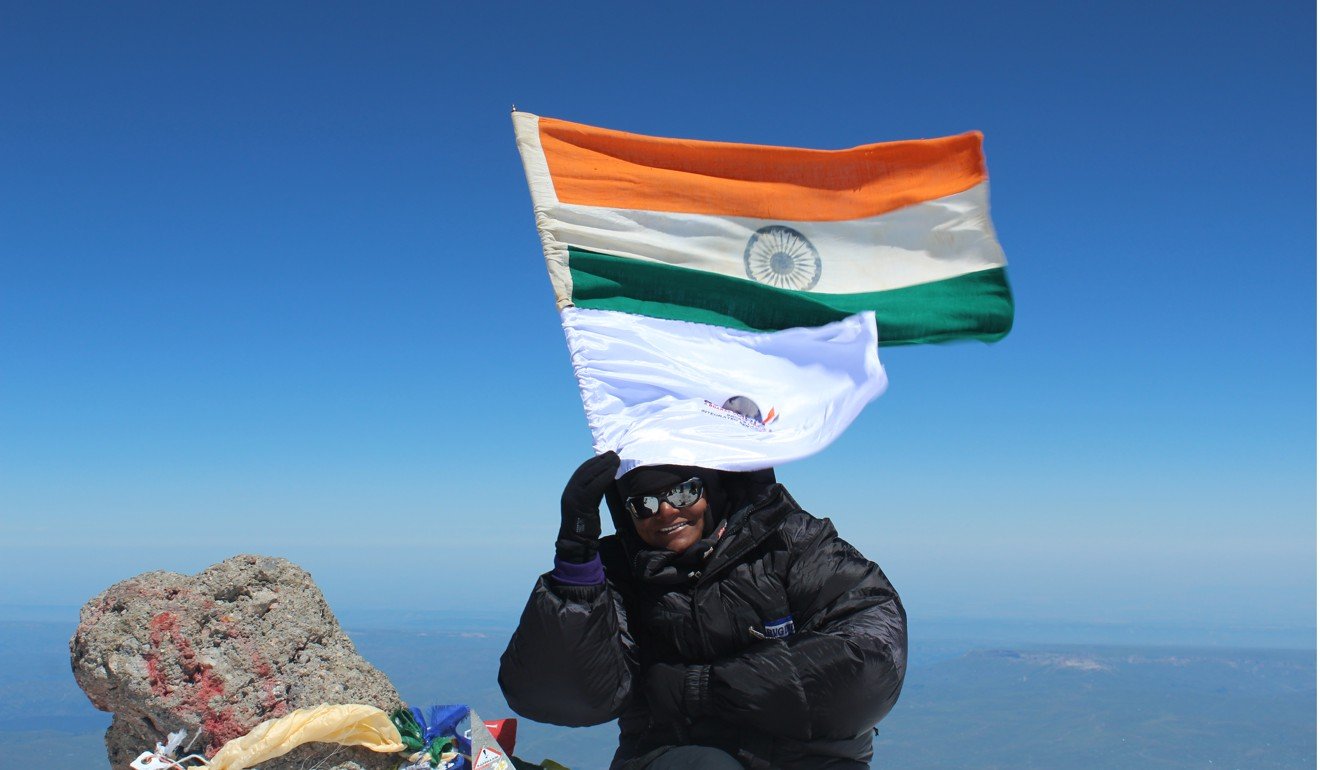 Sinha on Mt Elbrus. She is one peak away from completing the Seven Summits Challenge. Photo: courtesy of Arunima Sinha


There is no mountain high enough to stop amputee Arunima Sinha, who has scaled: