The Water Crisis and Criticality of Water Resource Management 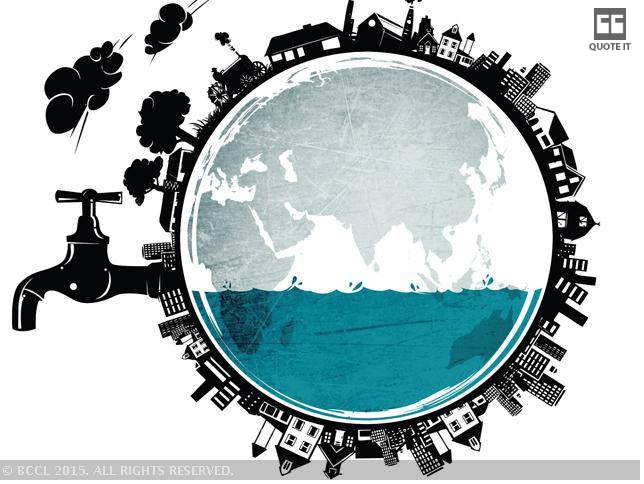 Advertisement
While a significant proportion of the earth’s surface is covered with water, only a miniscule fraction of it is available for sustenance of life; the remaining being either saline or frozen in glaciers or the ice caps. This highlights the importance of conservation of freshwater sources such as the surface water found in rivers, lakes, and wetlands and groundwater, found underground in soil, sand and rocks. Figure 1.1 shows the distribution of water in various forms on . 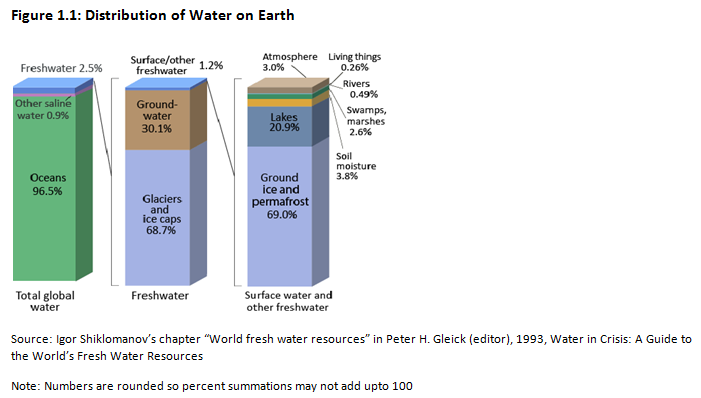 The endowment of the freshwater resources varies across the world. In 2014, out of the total world internal renewable freshwater resources, Latin America and Caribbean had the highest share of 32 per cent, followed by the East Asia and Pacific (24 per cent), Europe and Central Asia (17 per cent), North America (13 per cent), Sub-Saharan Africa (9 per cent), South Asia (5 per cent) and Middle East and North Africa (1 per cent). Further, the world withdraws about 9 per cent of its freshwater annually for meeting the needs of its agriculture, industrial and domestic sectors; with agriculture sector abstracting a predominant share of 60 per cent of the freshwater, while industry’s share is 22 per cent and domestic sector’s share is 18 per cent (, 2014)

Further, since the 1980s, freshwater withdrawals have increased globally at a rate of 1 per cent per year, primarily due to demand arising in developing countries. Growing demand and vulnerable supply of water, has led to the problem of water scarcity in these countries, with the agriculture being the most affected sector of these economies. The severity of water scarcity varies in these countries from “absolute water scarcity” to “regular water stress”, based on the per capita availability of renewable water per year. A country faces “absolute water scarcity “if per capita renewable water per year drops below 500 m 3 , ,while it is in “regular water stress” if per capita renewable water per year stays between 1000m 3 and 1700 m 3 . A country is said to be in “chronic water scarcity” when water supply drops below 1000m 3 per capita per year.
Advertisement
While countries such as India, Pakistan ,Uzbekistan , Ethiopia, Somalia, and Nigeria face regular water stress, countries such as Algeria, Tunisia, Libya, Saudi Arabia, Yemen, Oman and UAE face absolute water scarcity (FAO-Acquastat, 2015). Water scarcity in these countries has resulted not just from climatic factors, but also has been a result of lack of proper infrastructure in place for the storage of water during the times of surplus water supply. A well developed storage infrastructure for buffering water along with good governance in ensuring water resource management is essential to overcome the ongoing in these countries. Moreover, emphasis should be given on ensuring quality of water as poor quality further compounds the problem of water scarcity. Degraded water quality costs Middle Eastern and North African countries between 0.5 per cent and 2.5 per cent of annual (World Bank, 2007). Further, transboundary nature of most of the river basins makes regional dialogues between the countries imperative.

Another major concern that has been faced globally is the over extraction of groundwater reserves that has been further aggravated by the water loss due to leakage. While about 38 per cent of the irrigated areas globally make use of the groundwater (Siebert et al., 2013); nearly 30 per cent of water is lost on account of leakage (Kingdom et al., 2006; Danilenko et al., 2014). This highlights the criticality of making an optimum use of the water resources worldwide.

Considering the global importance of water reserves, the United Nation’s(UN) 2030 agenda for sustainable development incorporates water at the core of its Sustainable Development Goals, and goes beyond the previously developed Millennium Development Goals (MDGs) (2000-2015) to now cover the entire water cycle from drinking water and basic sanitation to address broader issues such as water quality and wastewater management, water scarcity and related efficient usage of water, integrated water resource management and protection and restoration of water related ecosystems.

(This article has been co-authored by Deepti Mathur, who is with the Social Progress Initiative India)