Meet the most qualified Indian truck driver, who’s also a mother of two 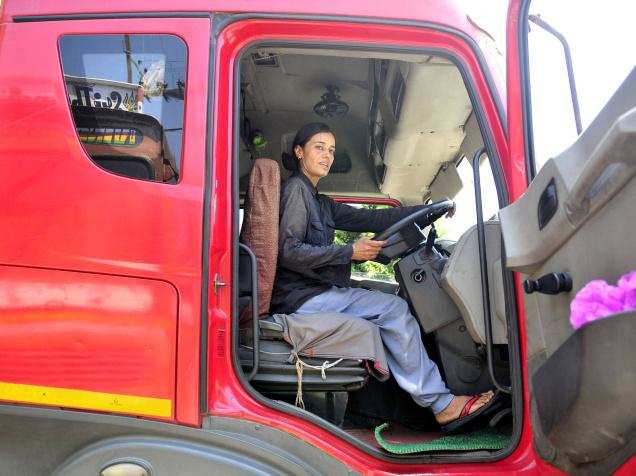 
wears many sleeves. She is trained in law, a mother of two undergraduate students and since 2000- a truck driver, who’s been driving across the length and breadth of the country.
Advertisement Her surprising choice of occupation was a result of an ill-fated marriage and a resolve to make ends meet for her family.

Yogita, who is originally from Uttar Pradesh but grew up in Nandurbar, Maharashtra along with her four siblings was a keen student and earned degrees in both commerce and law.

In 1991, she was married off to a man from Bhopal, whose family claimed that he was a lawyer practicing in the Bhopal High Court before the marriage. Unfortunately for her, that claim turned out to be a lie and became the foundation for an extremely unhappy marriage.

Advertisement
It was when her husband passed away in a road accident 16 years ago, did Yogita consider the decision to work as a taking on the tough and risky life of the highways, despite being academically qualified.

At that time, what she needed was instant money to support her family and two children and driving the big trucks gave her that. She realised that the amount she would earn being employed in a field of law as a beginner would not have been enough for her circumstances.

“If I had opted to be a junior to some lawyer and enter the legal profession, I would have got only a pittance for the many initial years. But I learnt that driving trucks meant instant wages,” Yogita explained.
Advertisement

Naturally, her journey as India’s most qualified woman driver began with snide comments and hostile stares but Yogita wasn’t one to give up. She worked her way through all the obstacles and is now a confident woman working in a male dominated field and providing for her two children.

What more, by 2013, she had already managed to drive more than 5 lakh kilometres. Advertisement
Now, in her late forties, Yogita can expertly maneuver a 14-wheeler truck with its 30-tonne-cargo through the busy lanes of the country.

This week for example, she had driven a liquor consignment all the way from Bhopal to a Kerala State Beverages Corporation godown.

If nothing, Yogita is an for women across the country for her courage, resolve and never say die attitude, Advertisement