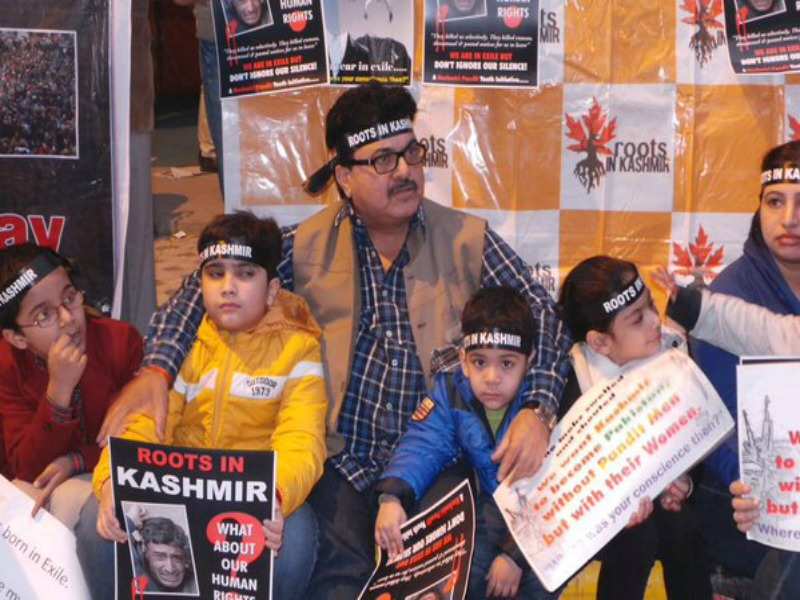 ‘New generations of Kashmiri Pandits are born in exile, in refugee camps even after 26 years, ain’t that a matter of utter shame?’

Questions like these are pouring in at Twitter as Kashmiri Pandits mark Exodus Day. Twenty six ago in 1990, more than 300,000 Kashmiri Pandits, or Kashmiri Hindus, had fled the Valley, during insurgency, with a hope that peace will restore and they will return back.

More than two decades have passed and the successive governments have failed to ensure normalcy for Kashmiri Pandits. While recounting stories during insurgency, Kashmiri Pandits say their homes were burnt and lands were grabbed. The community says they fear the same as the talks have largely remained on papers.

Advertisement
When Prime Minister Narendra Modi-led Indian government stormed into power in 2014, he spoke about rehabilitation of Kashmiri Pandits in the Valley, along with various welfare schemes. Even President Pranab Mukherjee backed Modi, saying it was an issue of prime importance and Kashmiri Pandits will not be left out in development schemes.

However, an RTI states the opposite.

Mail Today, which had access to an RTI filed by a member of Roots in Kashmir Rasnik Kher, reported that things are at a standstill even after one and a half years.

Advertisement
Kher said there has been talk on the same, neither the Centre nor the state government seems to be interested in the issue. As per Kher, there is no plan.

Meanwhile, Bollywood actor Anupam Kher has been active on this issue, raising his voice against the unfair treatment.

Our destroyed houses still tell our bleeding stories. We once lived there thinking of a bright future. #KPExodusDay pic.twitter.com/8bI4AkOd3l


Today, my fellow Indians i urge you on behalf of lakhs of #KashmiriPanditRefugees to fight 4 us. Don't pity us. Show us tat you care & love.

Even Twitter is abuzz with photos and comments on the return of Kashmiri Pandits to the Valley.


Ticket to exile: Bus ticket purchased by family on 19th Jan., 1990 when we were forced out of Kashmir. #KPExodusDay pic.twitter.com/dXBzVrKXoT

This is the temple I visited everyday before our exodus . Its been 27 years now . Asking me why ? #KPExodusDay pic.twitter.com/z12qCJHpSK

Half a million Indians competing 26 yrs of exile in their own country. Yes 26 yrs, no action, no justice not even a enquiry. #KPExodusDay


Sarvanand Kaul Premi wrote Bhagwat Gita in Kashmiri,nails were hammered where he would have tilak, #KPExodusDay pic.twitter.com/GXL0n1cQGE


It is one of d most unfortunate, silent & generally ignored tragedies of contemporary times #KPExodusDay

A lesson every minority community should learn from #KpExodusDay --> Become a votebank somehow. If not, you are extinct.


Experts say this is an issue of grave seriousness and the governments, both Centre and state, should take quick steps to ensure rehabilitation of Kashmiri Pandits.

Only time will tell, if the apathy will continue.

(Image: Twitter)
Advertisement
NewsletterSIMPLY PUT - where we join the dots to inform and inspire you. Sign up for a weekly brief collating many news items into one untangled thought delivered straight to your mailbox.
CAPTCHA: