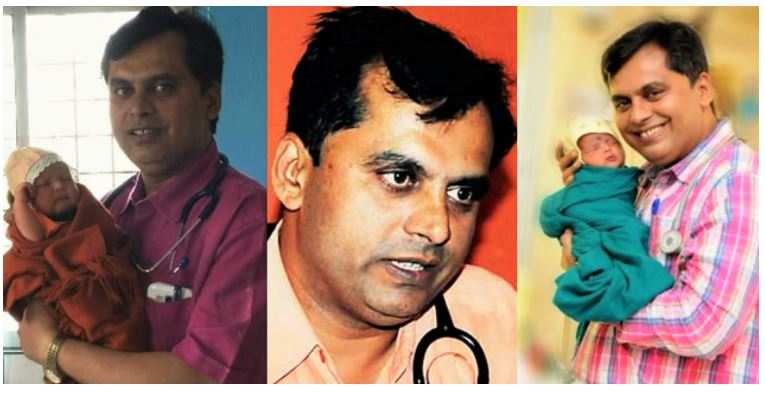 In 2007, set up a 25-bed Medicare General and Maternity Hospital in the Hadapsar suburb of Pune, with the aim to help underprivileged patients. But, today he’s doing more than just that.

As his hospital has grown, so has the intensity of his work. In a bid to fight , Dr Rakh kicked off a unique initiative on January 2012. In line with the initiative, Dr Rakh wouldn’t charge any delivery fees if a girl child is born.

Not just that, the entire hospital celebrates the birth of the girl by distributing sweets.

Advertisement
In an interview with Deccan Herald, Dr Rakh had said that female infanticide is rampant because of the presence of regressive social norms, which he believes are not only anti-women, but also anti-girl child.

He further states that as a medical professional, he has seen the torture that a mother undergoes when she comes to know that she has delivered a girl.

Hence, Dr Rakh tried doing his bit to help reduce the social stigma of delivering a and has waived off maternity charges in over 200 deliveries, both normal and caesarian.

Advertisement
Initially, his initiative was met with a lot of apprehension from his gyanecologists and paediatricians.

“When I told them that I’d decided that the hospital will bear the expenses of neo-natal care, they were understandably quite skeptical as to whether I would be able to run a hospital or not,” he admits.

Relatives gathering on the day of the delivery are a given sight in any hospital. But, what we fail to notice is the scenario that happens after they are made aware of the sex of the infant born.

Advertisement
“They hug each when a boy is born and disappear when a girl is born,” Dr Rakh states.

It was this scenario and the added mental trauma on expecting mothers that changed Dr Rakh’s thinking and lucky for him, he found support from unexpected quarters.

As word of his initiative kept spreading, he was contacted by a host of colleagues and doctors working in interior districts such as Ahmednagar, Beed and Solapur wrote to him saying they will stop carrying our procedures such as unwarranted medical termination of pregnancy and indiscriminate sex discrimination tests in solidarity and welcome a girl child by motivating families.

Advertisement
Some doctors, like Dr Pravin Dungarvar who runs Anand Hospital at Kunjirwadi at Haveli Taluka started charging half the amount in case a girl was born, in a bid to show his support for Dr Rakh’s initiative.

While in Solapur district, Vinod Kekan, the sarpanch of Vanjarwadi village had even announced a prize of Rs 10,000 to any person who gave information or helped stopped female foeticide.

Kekan thought if one man could do it, why couldn’t an entire village?