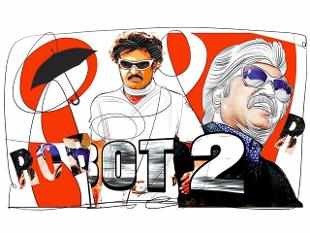 Superstar ’s next Enthiran 2 (Robot 2) has been tipped as India's most expensive film ever. Set for release next year, it's already set a record in insurance cover for an Indian movie— Rs 330 crore, surpassing Rs 300 crore for (2014), starring , said two people involved in writing the policy.

Remuneration for the top four stars of film, which is being made in Tamil and possibly other languages, is also among the highest at Rs 150 crore. Apart from the Tamil star, they include Akshay Kumar and Amy Jackson, who takes over from Aishwarya Rai, who was the heroine of Enthiran. S Shankar will direct again.
Advertisement

"This is the highest ever insured movie after Aamir Khan starrer PK and Salman Khan's Kick," said Sumant Salian, business head, media and entertainment, Alliance Insurance Brokers. "Insurance cover for Robot 2 would double when the movie is ready and it goes for distribution."

State-run general insurance companies have a penchant for movies with star casts as the risk of them flopping are low. Producers are increasingly opting for insurance to protect themselves against projects getting delayed because of star tantrums and other unforeseen reasons.

Insurance covers risk from preproduction till the first copy of the movie. Various contingencies such as shoot cancellation, property risk, personal accident and thirdparty liabilities are also covered. Production insurance covers loss of life or property on film sets. The media liability policy is a kind of errors and omissions liability insurance, mainly insuring against legal issues arising out of a movie's content. The policy also covers post-release issues as a result of riots or strike.
Advertisement

has become a part of the movie-production process in the mainstream Indian film industry as costs have increased.

Baahubali, a two-part film in Telugu and other languages written and directed by SS Rajamouli, had production insurance cover of Rs 200 crore. Director and producer Subhash Ghai was the first to buy insurance cover for his film Taal, which was released in 1999.