Maharashtra remains the worst-hit state with the total number of cases rising to 22,171, followed by Gujarat which reported 8,194 cases and Delhi with 6,923 cases.

There are a total of 7,204 cases reported in Tamil Nadu. Madhya Pradesh has reported 3,614 while Rajasthan has 3,814 cases so far. A total of 3,467 cases have been reported in Uttar Pradesh.
AdvertisementStates and union territories (UTs) which have reported less than 10 cases so far are Arunachal Pradesh, Dadar Nagar Haveli, Manipur, Mizoram, Goa and Puducherry. 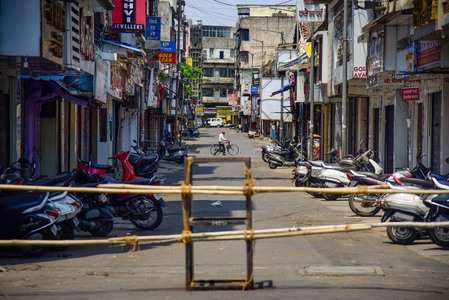 "Salil Topo, Junior Judicial Assistant Ahlmad in the court of Ms Anuradha Prasad, Civil Judge has been detected COVID-19 positive on 09.05.2020," District and Sessions Judge Neena Bansal Krishna said in a statement on Sunday.
Advertisement
Topo had last visited the court on May 4 for some official work and came in contact with Steno Ravish Kumar.

"Ravish Kumar is directed to remain self quarantined for 14 days and take necessary precautions," the Judge added.

Saket court is one of the six district court's in the national capital.
Advertisement16 more corona cases among BSF personnel, kin reported in Tripura
A BSF officer and 15 family members of personnel Sunday tested positive for coronavirus, taking the total number of infection cases among the troopers and their kin in Tripura to 148, Chief Minister Biplab Kumar Deb said on Sunday evening (May 10).

Deb, in a tweet, said that the 16 fresh cases were found in the Border Security Force's (BSF) 86th Battalion headquartered in Ambassa, the district headquarters of Dhalai, 82 km north of Agartala.

The 16 fresh cases included one officer, nine children and six women.Advertisement
"Seventy-five samples of jawans belonging to 3rd Battalion BSF (whose headquarters are at Nalkata in the same Dhalai district) tested, but all reports are found to be negative," said Deb, who also holds charge of the Health and Home Departments.

Before that. 12 personnel of the force tested positive on Friday, while 37 tested positive on Thursday. Advertisement
The official said a total of 127 ITBP personnel have been admitted to the Central Armed Police Forces (CAPF) Referral Hospital in Greater Noida while 26 are at the AIIMS in Haryana's Jhajjar and two at Safdarjung hospital in Delhi. One personnel is being treated at Base Hospital in Tigri.

The CAPF Hospital has emerged as a hub for treating coronavirus affected personnel from not just the ITBP but different paramilitary forces. Besides 127 ITBP personnel, it houses 27 BSF troopers, four CRPF and one CISF and NSG personnel each. The facility is also treating one civilian and four family members of ITBP personnel.

Maharashtra Covid-19 deaths reach 832, cases cross 22,000 mark
AdvertisementMaharashtra on Sunday recorded a fresh record high of 53 Covid-19 deaths in a single day — up from Saturday's 48 — and the number of positive cases shot past 22,000, health officials said.

With 53 fatalities, the death toll shot up to 832, and the total number of coronavirus patients increased to 22,171, with the highest jump of 1,278 cases.

Of the total deaths, 19 were recorded in Mumbai, as well as one of a person hailing from Madhya Pradesh - taking the city's toll to 508 and the number of Covid-19 positive patients in the city shot up by 875 to 13,739, the highest spurt till date.
AdvertisementDharavi slum alone continued to be a major hotspot in Mumbai, notching 26 new cases, taking the total number of patients to 859, and 29 deaths till now. Besides Mumbai, 14 deaths were recorded in Malegaon (Nashik), Pune recorded six, Jalgaon five, Dhule three, and Ahmednagar, Aurangabad, Nandurbar, Solapur and Palghar one each.

The state has recorded six deaths of police officers due to Covid-19, and another 648 are positive, Home Minister Anil Deshmukh said on Sunday.

Gujarat crosses 8,000 mark with 8,195 cases; 493 deaths
With the addition of almost 400 cases on Sunday, Gujarat's total of positive coronavirus cases crossed the 8,000 mark as it reached 8,195.Advertisement
Similarly, the death toll also inched towards the 500 mark with 493 deaths, as 21 more people succumbed to pandemic on Sunday. The silver lining amidst this gloomy scenario was that over 400 patients were discharged from hospitals across the state on Sunday.

The surveillance and testing in the state is being carried out on a campaign mode since a month resulting in a huge number of positive cases being detected.Advertisement
Here are the latest number of cases across states as per the Ministry of Health and Family Welfare website.