BI India Bureau
Feb 12, 2020, 12:19 IST
An elderly Muslim shows the indelible ink mark on his finger after casting his vote at a polling station in the old quarters of New Delhi, India, Saturday, Feb. 8, 2020. Voting began for a crucial state election in India's capital on Saturday with Prime Minister Narendra Modi's Hindu nationalist party trying to regain power after a 22-and major victories in a national vote. The BJP campaign has reopened old wounds in the Hindu-Muslim divide and treats the election as a referendum on nearly two months of protests across India against a new citizenship law that excludes Muslims. (AP Photo/Manish Swarup)
Update at 9:35pm: EC confirms AAP is leading in 3 seats and won 59 while BJP has won 8.

Update at 4:55pm: EC confirms AAP win in 18 seats with BJP trailing behind with one confirmed seat.
AdvertisementUpdate at 4:00 pm: Om Prakash Sharma of Vishwas Nagar from BJP wins, first seat from the party to be confirmed.

Update a t 3:40 pm: "This is the beginning of a new kind of politics. This is a new sign," said Kejriwal.
Advertisement
Update at 3.37 pm: Arvind Kejriwal says 'I love you' to Delhi after a historic win. "This is the victory of every family who has been getting education, electricity and medical facilities," he said.

Update at 2:46 pm: Manish Sisodia speaks to the media, says, "I am happy that voters of Patparganj did not fall for BJP's politics of hate ".

Update at 2:42 pm: Raghav Chadha welcomed at AAP's office, carried on shoulders and garlanded. Manish Sisodia has left the counting centre to reach AAP office.
AdvertisementUpdate at 2:30 pm: Manish Sisodia leads with over 2000 votes from the Patparganj constituency, while Atishi leads by over 9770 votes.

Update at 1:50 pm: AAP has gained 57 seats according to the Election Commission. But some of its star candidates are still witnessing a close fight. Atishi, AAP's candidate from Kalkaji, has taken a lead over BJP's Dharambir Singh. However, Deputy CM Manish Sisodia is currently trailing from the Patparganj constituency.

However, there were at least five constituencies where the leading, irrespective of the party, had a lead of less than 100 votes.

Slimmest leads
Source: Election CommissionAdvertisement
While all exit polls without exception have handed the Aam Aadmi Party (AAP) a clear victory, it will be interesting to see the impact of the fall in voter turnout to 62.59%, compared to 67.13% five years ago.

In New Delhi constituency, Arvind Kejriwal, who is seeking re-election, is leading over BJP Sunil Yadav by over 6000 votes. In 2015, Kejriwal won the election with a margin of 31583 votes

Arvind Kejriwal, Delhi’s chief minister, is hoping to earn a second term in office. His manifesto for the election was a 10-step ‘Kejriwal ki Guarantee’ — including promises like regularising the city’s unauthorised colonies, a ‘world-class’ education system, more public transportation and making Delhi litter-free.Advertisement


Sanjay Singh, AAP MP on early trends: Wait for the final result, we are going to register a massive win.… https://t.co/YjHeTxwIkg


The poll of all exit polls showed a clear majority for the Aam Aadmi Party (AAP) with a few seats for the challenger, Bharatiya Janata Party (BJP). Congress has no seats in the assembly to protect but a lot of pride at stake.
Advertisement

Top candidates to watch out for in Delhi Election 2020

There is a lot at stake for Manoj Tiwari, who entered politics in 2009, is a member of the parliament from North East Delhi.
Advertisement
The 49-year-old actor, singer and politician has led BJP’s campaign in Delhi. If the party springs a surprise win, which seems unlikely, or even some meaningful gains, it will raise Tiwari’s political stature and position him for a larger role in the national party ahead. Crucial state election in his home state of Bihar are scheduled later this year.

BJP leaders have claimed that the results of the Delhi Assembly election results will take everyone by surprise as the saffron party is all set to stake claim to power with a resounding majority, the IANS reported."Don't be surprised if we win 55 seats," Tiwari claimed on Wednesday morning, just before the counting began.

On the other hand, Congress has seen dwindling vote share in the national capital. An analysis of the last nine elections in Delhi, including the ones for the Parliament and the civic body aside from the state assembly, show that the national party is losing appeal among the electorate, steadily. Advertisement

This story will be updated with news and highlights as they develop through the day.

SEE ALSO:
Election strategy: AAP may win in Delhi by not falling for BJP’s traps 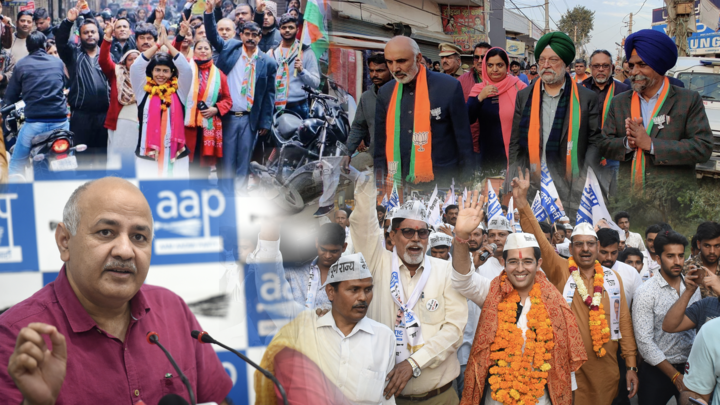 Top candidates to watch out for in Delhi Election 2020