Google to close door on Gtalk from February 16 onwards 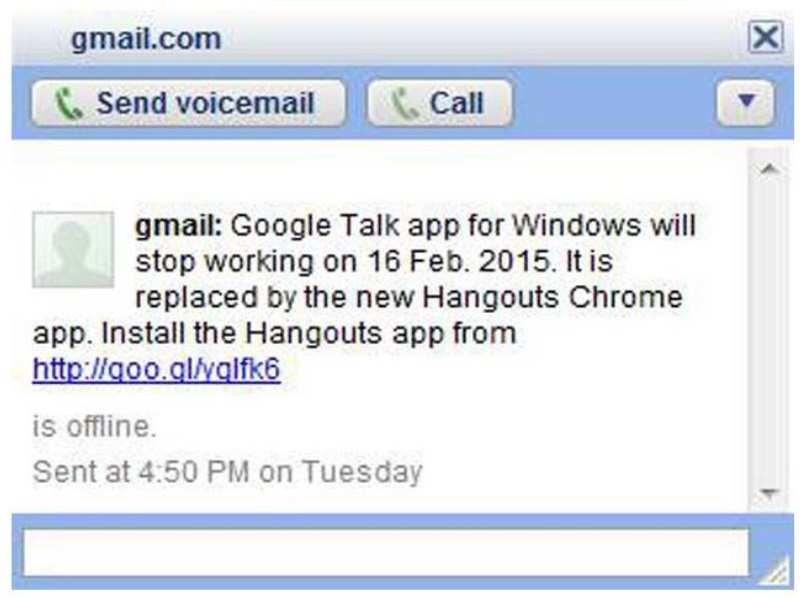 In two weeks from now, you'll have to make the switch from Google's messenger platform to its Hangout (whether they like it or not). Millions of users have been using the Gtalk for long time and they've become so comfortable with it that moving away has never been considered. So, Google has decided to force users by shutting down Gtalk once and for all.

Hangout is the future for Google (so they seem to think) and hence taking down Gtalk is the most logical thing that the search-engine giant can do now. Signs of Gtalk going down became obvious when Google decided to cut support (security and version) for the desktop application bringing its end closer to reality. As highlighted by Google the 'IM service will be wholly replaced by the Hangouts app, which can used only via its Chrome web browser.
Gtalk will breathe its last on February 16 and whoosh! Like all good things, Gtalk will become history (just like how has been). Hangout hasn't been openly liked by all users but with phone-tablet-PC integration becoming need of hour (something Microsoft has tried with Windows 10), the transition was bound to happen sooner than later. has now moved to PCs as well and that has made Gtalk all the more redundant (not many would agree to that), so with Hangout Google wants to make instant messaging; interactive and visual appealing experience.

Ciao Gtalk, we'll always remember than message alert tone and the simplicity of the chat interface (remember that bubbles?).
NewsletterSIMPLY PUT - where we join the dots to inform and inspire you. Sign up for a weekly brief collating many news items into one untangled thought delivered straight to your mailbox.
CAPTCHA: